awaiting the formality of their first cardiac

[...] In Philo, educating yourself was something you had to do in spite of school, not because of it -- which is basically why so many of my high school peers are still there in Philo even now, selling one another insurance, drinking supermarket liquor, watching television, awaiting the formality of their first cardiac. [...] 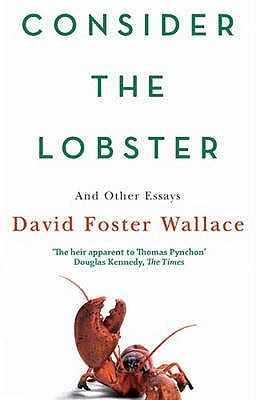 try to imagine it was you

[...] take a second or two to do some creative visualization and imagine the moment between John McCain’s first getting offered early release and his turning it down. Try to imagine it was you. Imagine how loudly your most basic, primal self-interest would cry out to you in that moment, and all the ways you could rationalize accepting the offer: What difference would one less POW make? Plus maybe it’d give the other POWs hope and keep them going, and I mean 100 pounds and expected to die and surely the Code of Conduct doesn’t apply to you if you need a doctor or else you’re going to die, plus if you could stay alive by getting out you could make a promise to God to do nothing but Total Good from now on and make the world better and so your accepting would be better for the world than your refusing, and maybe if Dad wasn’t worried about the Vietnamese retaliating against you here in prison he could prosecute the war more aggressively and end it sooner and actually save lives so yes maybe you could actually save lives if you took the offer and got out versus what real purpose gets served by you staying here in a box and getting beaten to death, and by the way oh Jesus imagine it a real doctor and real surgery with painkillers and clean sheets and a chance to heal and not be in agony and to see your kids again, your wife, to smell your wife’s hair. . . . Can you hear it? What would be happening inside your head? Would you have refused the offer? Could you have? You can’t know for sure. None of us can. It’s hard even to imagine the levels of pain and fear and want in that moment, much less to know how we’d react. None of us can know.

But, see, we do know how this man reacted. That he chose to spend four more years there, mostly in a dark box, alone, tapping messages on the walls to the others, rather than violate a Code. Maybe he was nuts. But the point is that with McCain it feels like we know, for a proven fact, that he is capable of devotion to something other, more, than his own self-interest. So that when he says the line in speeches now you can feel like maybe it’s not just more candidate bullshit, that with this guy it’s maybe the truth. Or maybe both the truth and bullshit — the man does want your vote, after all.

But if you, like poor old Rolling Stone, have come to a point on the Trail where you’ve started fearing your own cynicism almost as much as you fear your own credulity and the salesmen who feed on it, you may find your thoughts returning again and again to a certain dark and box-sized cell in a certain Hilton half a world and three careers away, to the torture and fear and offer of release and a certain Young Voter named McCain’s refusal to violate a Code. There were no techs’ cameras in that box, no aides or consultants, no paradoxes or gray areas; nothing to sell. There was just one guy and whatever in his character sustained him. This is a huge deal. In your mind, that Hoa Lo box becomes sort of a special dressing room with a star on the door, the private place behind the stage where one imagines “the real John McCain” still lives. And but now the paradox here is that this box that makes McCain “real” is, by definition, locked. Impenetrable. Nobody gets in or out. This is huge, too; you should keep it in mind. It is why, however many behind-the-scenes pencils get put on the case, a “profile” of John McCain is going to be just that: one side, exterior, split and diffracted by so many lenses there’s way more than one man to see. Salesman or leader or neither or both, the final paradox — the really tiny central one, way down deep inside all the other campaign puzzles’ spinning boxes and squares that layer McCain — is that whether he’s truly “for real” now depends less on what is in his heart than on what might be in yours. Try to stay awake.

and yet always saps me dry

Yet for every conceivable holiday--from Easter lamb to Christmas ham--our tin-car car crunches up the drive to the Whitbread estate, which lures me in some ways and yet always saps me dry. This isn't meant to sound peevish, for the Whitbreads are never not nice. But from the second I haul my bag up the curved stair, the place drains me of force like a battery going rust. Maybe it's all the fine wines I take in. Of those many visits, I remember absolutely nil. Beyond sitting at a table while plates appear and get swept away, I can't recount one damn thing we did.

never, not in decades, stop being strangers

[...] My longed-for circle of family is choking me. The silk bow ties on my cheap business blouses--that middle-class disguise I'd wished for--are choking me. The good family name for my son is a strangle, since it forces me to drive with a restless kid hours in murderous traffic to dine with polite people who never, not in decades, stop being strangers. [...]

there is no longer an identifiable external enemy

[...] it was easy for the advocates of post-Fordist Capital to present themselves as the opponents of the status quo, bravely resisting an inertial organized labor 'pointlessly' invested in fruitless ideological antagonism which served the ends of union leaders and politicians, but did little to advance the hopes of the class they purportedly represented. Antagonism is not now located externally, in the face-off between class blocs, but internally, in the psychology of the worker, who, as a worker, is interested in old-style class conflict, but, as someone with a pension fund, is also interested in maximizing the yield from his or her investments. There is no longer an identifiable external enemy. The consequences is, Marazzi argues, that post-Fordist workers are like the Old Testament Jews after they left the 'house of slavery': liberated from a bondage to which they have no wish to return but also abandoned, stranded in the desert, confused about the way forward.

the ashes of Russia’s Provisional Government

With all the seriousness in the world, like burnt-out matches telling grim stories of the conflagration they will soon start, the ashes of Russia’s Provisional Government debated which of them to make dictator.

wow the imagery is beautiful

better than no light at all

The specifics of Russia, 1917, are distinct and crucial. It would be absurd, a ridiculous myopia, to hold up October as a simple lens through which to view the struggles of today. But it has been a long century, a long dusk of spite and cruelty, the excrescence and essence of its time. Twilight, even remembered twilight, is better than no light at all. It would be equally absurd to say that there is nothing we can learn from the revolution. To deny that the sumerki of October can be ours, and that it need not always be followed by night.

anguish and yellow sky at the same time

What is valid for the elements of artistic creation is also valid for their combinations. The painter does not want to draw signs on his canvas, he wants to create a thing. And if he puts together red, yellow, and green, there is no reason why this collection of colours should have a definable significance. [...] they never express his anger, his anguish, or his joy as do words or the expression of the face; they are impregnated with these emotions; and in order for them to have crept into these colours, which by themselves already had something like a meaning, his emotions get mixed up and grow obscure. Nobody can quite recognize them there.

Tintoretto did not choose that yellow rift in the sky above Golgotha to signify anguish or to provoke it. It is anguish and yellow sky at the same time. Not sky of anguish or anguished sky; it is an anguish become thing, an anguish which has turned into yellow rift of sky, and which thereby is submerged and impasted by the qualities peculiar to things, by their impermeability, their extension, their blind permanence, their externality, and that infinity of relations which they maintain with other things. That is, it is no longer readable. It is like an immense and vain effort, forever arrested half-way between sky and earth, to express what their nature keeps them from arresting.

the great polar night of the inhuman

[...] they no longer felt humanity as a limitless milieu. It was a thin flame within them which they alone kept alive. It kept itself going in the silence which they opposed to their executioners. About them was nothing but the great polar night of the inhuman and of unknowingness, which they did not even see, which they guessed in the glacial cold which pierced them.

on (French) writers during the Vichy years (I think)