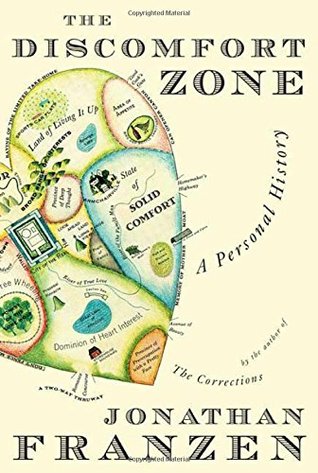 For the next twenty minutes, the three of us boarded and re-boarded the dismal merry-go-round, ensuring that our ride tickets weren't going to waste. I stared at the merry-go-round's chevroned metal floor and radiated shame, mentally vomiting back the treat they'd tried to give me. My mother, ever the dutiful traveler, took pictures of my father and me on our uncomfortably small horses, but beneath her forcible cheer she was angry at me, because she knew she was the one I was getting even with, because of our fight about clothes. My father, his fingers loosely grasping a horse-impaling metal pole, gazed into the distance with a look of resignation that summarized his life. I don't see how either of them bore it. I'd been their late, happy child, and now there was nothing I wanted more than to get away from them. My mother seemed to me hideously comformist and hopelessly obsessed with money and appearances; my father seemed to me allergic to every kind of fun. I didn't want the things they wanted. I didn't value what they valued. And were were all equally sorry to be riding the merry-go-round, and we were all equally at a loss to explain what had happened to us.

while at Disney World with his parents and feeling embarrassed to be seen with them (and in his mother-chosen clothes) as well as alienated from all the other teens. so sad

Do pictures tell? I have a color Polaroid of Vance at seven and Veronica at twenty-nine traversing a rickety dry-gray dock in Nova Scotia to board a fishing boat. The water is a deep iron smeared with plates of foam; the sky is a thin iron smeared with same; the mass of white gulls around Vance's outstretched bread-filled hand is a cloud of plunging white V's. Vance Vigorous, as he holds out his white little child's hand, is surrounded and obscured by a cloud of living, breathing shrieking, shitting, plunging incarnations of the letter V; and I have it captured forever on quality film, giving me the right and power to cry whenever and wherever I please. What might that say about pictures.

an unexpectedly beautiful and sad paragraph

we let the other get smaller

[...] And so begins what I see as his slow fade from me. We talk less and less, and since we both grew up in houses schooled to letting people vaporize into their own internal deserts with alacrity, we each let the other get smaller.

the beginning of the end, after she announces her pregnancy

a burst of sea spray

[...] I hold my liquor enough to hear--from the mouths of poets--work I'm itching to read, books I can vanish down into from my grind. The night is a burst of sea spray washed across my face, tangible evidence of a fresh existence only slightly out of reach.

of self I had little

Maybe that time is so blurry to me--more even than my drinking time--because we remember through a filter of self, and of self I had little, having been flattened like a cartoon coyote by an inner anvil. With no self, experience streams past. Time lags until it's sponged up. [...]

the flashing strobes of predreams

Sophie, in bed, drowsed, and bits of memory came at her in the flashing strobes of predreams. Here's a shiny ice storm, two newlyweds in a new tract house in Cicero. Ice glittering gray in a crunchy March lawn, more wet ice falling out of a sky without color. Solomon watching it out a window, Sophie behind him with her arms around his thick waist, her hair a black waterfall down his arm, her chin on his shoulder, also watching. Pellets of dirty Cicero crystal hitting the hard lawn, beads bouncing and jumping hopping lively skittering ice. Solomon's voice, quiet, full of Silverfish dreams, his breath fogs a rainbow circle on the window as he stares at the jumping beads, whispers to himself grasshoppers grasshoppers grasshoppers. A young man she loves dreams life into ice while she plays with his ear.

completely unsure of my footing

I stand on the end platform of the tram and am completely unsure of my footing in this world, in this town, in my family.

to understand this you have to become this

I think I'm actually starting to understand. I was hell-bent on being an effective humanitarian in Cambodia and Somalia. But a naïve fog is finally lifting. Revealed is a train wreck of illusions, the depravity of someone else's war, the futility of a competence still-born there. To understand this you have to become this.

let the dead bury the dead

I set out to save lives and have ended up collecting the dead. Somewhere along the line, I lost sight of treating people and became obsessed with my own grandiose ideals of service. But there is no redemption in this. I've worked myself into the ground only to end up doing the very thing my parents begged me to avoid. I've ended up serving myself.

All that is left now is to hold on for that day, sometime after the first snowfall, when my deputy will radio me from the grave with the news that our backhoe has finally hit undisturbed earth at the bottom and the last of the dead are back above ground. When I receive that message, I'll drive out into the stubble of the cornfields, stand alone on the edge, and stare down into that gaping hole one last time. Then I'll get go of this millstone of belief and ideals that's breaking my neck, watch it tumble down and sink slowly into the mud at the bottom. I've had it with our humanitarian hubris. Let the dead bury the dead.

Afterward I'll give the final order of my brief but eventful forensic career, this time to the engineer. Bulldoze in this hole and bury my youthful illusions. Then I'll crack open a beer and drink a toast. Farewell death, you son of a bitch. Here's to the rest of my life.

we actually set out to save the world

We actually set out to save the world. That is what was insane — not ten-year-old warlords with bad breath and voodoo fetishes in Liberia, not Matt's assassin, not the boss in Somalia who set us up for an ambush in exchange for a fifteen percent kickback on the judges' salaries, not the Hutu militias who butchered a minority who had repressed them or the Tutsi survivors who executed the suspects — but me, for thinking I could enter a war and personally restore order.

So that's the easy answer: forswear idealism; resign myself to a sad maturity; put away the things of youth; be thankful I survived and move on. But that's horseshit too, a craven capitulation. I'm not ready to let the youthful part of myself go yet. If maturity means becoming a cynic, if you have to kill the part of yourself that is naïve and romantic and idealistic — the part of yourself you treasure most — to claim maturity, is it not better to die young but with your humanity intact? If everyone resigns themselves to cynicism, isn't that exactly how vulnerable millions end up dead?

When the Cold Was ended, the power of freedom, democracy and hope weren't abstract concepts; they were palpable in the Iraqi desert, across the Berlin Wall, in Tiananmen Square, atop Yeltsin's tank. That hope crescendoed for us in Cambodia. So we piled into Somalia, Haiti, and Bosnia — missionaries, mercenaries, and madmen with no understanding of the history, politics, or culture but with Land Cruisers, military-issue radios, malaria pills, and the sure knowledge that we were on the right side of history.

What a feeling. Andrew wanted to bind the wounds of innocent war victims, hoping to find grace. Heidi embraced the freedom-born-of-emergency determined to liberate herself and, in the process, as many women as she could touch. I planned to harness the power of an ascendant America to personally undo the Holocaust. Don't laugh. We were young. We weren't the first, and won't be the last, to venture forth overseas with grand ideas.

Then eighteen Rangers fell in Somalia and suddenly history started moving in the wrong direction. Rwanda, Haiti, and Bosnia were all in flames, burning the remains of our innocence. One million civilians we promised to protect died on our watch. There are many competing versions of this story — U.S., UN, NATO, EU. But we were there and capital letters always lie and our version has no meaning if no one renders it.

So I make the conscious choice to believe again: we did not misspend our youth. At least we can bear witness. I did save lives and I did earn my way into Dr. Andrew's club. The act of rendering is therefore mine. l won the right, I am the owner of that privilege.

There is a plaque in the Garden of the Righteous at Yad Vashem, the Holocaust memorial museum In Jerusalem, which reads, 'The Jewish people will never forget the righteous among the nations who endangered their lives in order to save Jews from the Nazi murderers and their collaborators. In their praiseworthy deeds they saved the honor of mankind.' I have a copy of these words over my desk and I look at them every day on my way out. Who saved the honor of mankind in Rwanda? Or Bosnia? Or, God help us, Liberia? But I have another quote from the exit of Yed Vashem over my desk, which reads, 'Son of man, keep not silent, forget not deeds of tyranny, cry out at the disaster of a people, recount it unto your children and they unto theirs from generation to generation.'

I don't know who saved the honor of mankind during my time in the field, but I do know that an ancestral memory of tyranny commands me to keep not silent.

There is no ambiguity here. I am a witness. I have a voice. I have to write it down.