some overlap with living advice, but also relevant for various stories i'm writing

deeply ambivalent about being embodied

Eyes the broad-shouldered faceless character that symbolizes Men's Room, does Sternberg, and struggles with himself. He's needed a bowel movement for hours, and since the LordAloft 7:10 lifted things have gotten critical. He tried, back at O'Hare. But he was unable to, because he was afraid to, afraid that Mark, who has the look of someone who never just has to, might enter the rest room and see Sternberg's shoes under a stall door and know that he, Sternberg, was having a bowel movement in the stall, infer that Sternberg had bowels, and thus organs, and thus a body. Like many Americans of his generation in this awkwardest of post-Imperial decades, an age suspended between exhaustion and replenishment, between input too ordinary to process and input too intense to bear, Sternberg is deeply ambivalent about being embodied; an informing fear that, were he really just an organism, he'd be nothing more than an ism of his organs.

[...] Ironically, a good part of his anticorporeal stance (it was his idea to call having a body Corporeal Punishment) derives from his non_fatal flaw, the skin trouble, the skin trouble itself deriving from a weekend years past, just before a cattle call for a Wisk spot he didn't get, a weekend of solo camping and getting-into-collar-soiled-character, with a tent, in the Berkshires, West of Boston, during which he'd contracted a mild spatter of poison sumac, and had purchased a discount generic brand of poison-sumac medicine he curses now and forever (like most terse-labeled generics the product was untrustworthy, turned out in fact to be medicine for the _sumac, not the sufferer therefrom, but if the label says MEDICINE FOR POISON SUMAC what the fuck are you going to think, standing there?) that had set his face, neck, chest and back aflame: pulsing, cystic, volcanic, allergic, clotted, almost sacredly scarred. The sumac is so bad it hurts--which of course is a constant reminder that it's there, on his body--and it won't go away, no sooner healed by brand-name antitoxin than reinfected. The whole thing's just pretty loathsome, and you can bet Sternberg loathes it. He's unhappy, but in that comparatively neat and easy way of those who are at least pretty sure they know why they're unhappy, and what to curse, now and forever.

Cause it's only dark, generally, back there in his eye's guts. Sometimes a spidery system of synaptic color, if he tries to move the bad eye too quickly. But usually nothing. But it'll heal, anyway. It'll come around. It's all in his head, he knows. Youthful-rebellion injury. Mrs. Sternberg warned from day one that the boy that does a forbidden thing, such as like for example crosses his eyes just to hurt a mother: that boy finds they stay like that. Well-known fact. Look it up in whatever resources orthodox mothers with lapsed sons access. Like early to bed: it's the sleep before dark that's most important. Like don't cry: you're better than whoever laughs at you. Like try this lotion, for sumac.

Here's the fresh sumac cyst, though, here, boy, between his eyes. It's darkened richly since the last cyst-check in O'Hare, matured from that tomato pink to the same plum shade as the airport lounge. The mirror does not lie.

Your average deformity sufferer has a love-hate thing with mirrors: you need to see how things are progressing, but you also hate it that they're progressing. Sternberg's not at all sure he likes the idea of sharing a mirror with a whole lot of actors. He's not sure he wants to rent a bureaucratic car and head West without sleep or soap for a Funhouse the brochure says is carefully designed utilizing mostly systems of mirrors. A crowded, mirrored place ... Sternberg ponders the idea as the automatic sink fills gurgling to his slit of the emergency drain at its rim. This sumac cyst between is eyes feels fucking alive, man. Pulses painfully with the squeak of his head's blood. The cyst is beginning to show a little bit of white at the acme. Not good. Clear evidence of white blood cells, which implies blood cells, and so a bloodstream. From there it doesn't take genius to figure out that you've got a body. A bit of white at an infected cyst's cap is pretty much embodiedness embodied. No way he's messing with the fucker, though. It would just love to be messed with. Would feed on it. And the stage after plum is eggplant, big and dusky and curved, like a new organ in itself, to be an ism of. 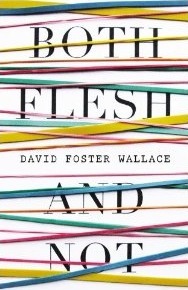 Beauty is not the goal of competitive sports, but high-level sports are a prime venue for the expression of human beauty. The relation is roughly that of courage to war.

The human beauty we're talking about here is beauty of a particular type; it might be called kinetic beauty. Its power and appeal are universal. It has nothing to do with sex or cultural norms. What it seems to have to do with, really, is human beings' reconciliation with the fact of having a body.

in a footnote, on why we need to reconcile this: "It's your body that dies, after all."

—p.8 Federer Both Flesh and Not (5) by David Foster Wallace 5 years, 1 month ago

'[...] People who live alone have no responsibility in the evenings. One fears a number of things--that one's body could vanish, that human beings may really be what they appear to be at twilight, that one might not be allowed to walk without a stick, that it might be a good idea to go to church and pray at the top of one's voice in order to be looked at and acquire a body.'

then it will be over

[...] He is now 'in a free state', but ends his tale like this: 'All that my freedom has brought me is the knowledge that I have a face and have a body, that I must feed this body and clothe this body for a certain number of years. Then it will be over.'

Santosh in Naipaul's In A Free State

this sack of skin full of problems

When I got home, I went to my room and took a single plastic-wrapped bandage from the drawer. I am normal, I thought. I have a body like anyone else. Then I scratched my arm open until it bled, just a faint spot of blood, widening into a droplet. I counted to three and afterward opened the bandage, placed it carefully over my arm, and disposed of the plastic wrap.

Was it not good? I said.

Can I ask you something? he said. Do you want me to leave her?

I looked at him then. He looked tired, and I could see that he hated everything I was doing to him. My body felt completely disposable, like a placeholder for something more valuable. I fantasized about taking it apart and lining my limbs up side by side to compare them.

I don't know what to do. I've been feeling fucking awful about it. You seem so upset with me and I don't know how I can make you happy.

Well, maybe we shouldn't see each other any more.

Yeah, he said. Okay. I guess you're probably right.

the misunderstanding here is so painful, so brutal, it seeps out of the page like poison

the audacity of physical trespass

[...] It would be no novel observation to remark that getting a tattoo is very painful, although it is a peculiar quality of pain that it never really gets old. All bodily pain begins with shock at the audacity of physical trespass, a kind of astonishment at the frankly unbelievable insinuation that one is not, in fact, the center of the universe. [...]

In truth, I was collecting pains, pinning them like insects to the corkboard of my brain, scribbling little labels below. Together I hoped they might testify to a deeper metamorphosis than the mere rearrangement of flesh [...]