Showing results by Immanuel Wallerstein only

the New Right and the New Left

In the meantime a different kind of popular movement began emerging from the Right. The New Right snatched many of its tactics and even former activists from the dispirited New Left. This turn to the right marked the end of the long period dominated by class politics with its familiar symbols, tactics, and well-rehearsed rituals of bargaining. The political reaction flew the colors of identity, which introduced into politics a nastily passionate charge because matters of identity tend to be uncompromising and noanegotiable. The New Right came in two varieties, though often meshing in practice: ethnopatriotic or religious-patriotic fundamentalism and libertarian market fundamentalism. Both called for the militant defense of fundamental matters of faith—or whatever was claimed to be the founding identities in their societies. Notice that both fundamentalisms directed their ire at state bureaucracies, blaming them for being too secular, removed, devious and taxing. It tells us something important about Christian, Muslim, Jewish, Buddhist, Hindu and other contemporary fundamentalisms that their suspicions and phobias virtually everywhere went hand-in-hand with extolling the virtues of small business, small town life, and the patriarchal family.

The Left was precipitously declining across the board, leaving its place in the popular imagination to be filled with either apathy or fundamentalist anger. This reversal in mass politics opened the window of opportunity for conservative factions among the Western capitalist elites. Neoliberalism, yet another misnomer, in fact grows from the old ideological belief of modern capitalists that everyone would eventually benefit from letting them do whatever they deem necessary in the pursuit and disposal of profits. World progress, the purported laws of human nature, and supreme rationality are but the nineteenth-century intellectual supports to this faith. The fundamentalist character of the neoliberal movement is revealed in its adamant refusal to recognize as capitalism anything except the purest unregulated markets—just as religious fundamentalists recognize only their own radical brand of faith as true religion. History, however, shows that the type of free markets cannot be observed in any empirical situation; it is an ideological fantasy. Following in the footsteps of Fernand Braudel and Joseph Schumpeter, we argue that sustained profits always require a degree of state protection and market monopoly. Hegemonic monopoly is what in fact propelled the renewed surge of American power and finance at the turn the twenty-first century. [...]

idk what buddhist or hindu fundamentalisms they're talking about but for the Abrahamic religions, absolutely, it tells you something very important about the whole reason these religions were created in the first place

a connection between our hopes and our hypotheses

Are political hopes blurring our theoretical visions? Our answer is this: Reflexively admitting a connection between our hopes and our hypotheses is a necessary component of theoretical honesty in social science, especially when dealing with our own times. Social theory is often likened to lenses of various cuts that enable us to discern patterns in human action. When the lenses are cut solely to confirm one's faith and denounce whatever opposes it, the resulting vision is strictly ideological. Such lenses, commonly worn in politics and public debating, function more like blinders. Theory is different because it has to be testable. What constitutes tests in social science has been a matter of controversy. We are methodological pluralists insofar as we doubt attempts to legislate the one right way of doing social science. Yet we are not complete relativists. Different kinds of problems and scales of analysis leave researchers the choice of investigative techniques. Experiments and statistical correlations have an important place in the toolkit of social science but their role cannot be universal. Disciplined ethnographic observation is often more revealing in studying localized social environments. At the macrohistorical level, which is where we work, the main method might be likened to connecting the dots in a big puzzle. Another test for macrohistorical theory are counterfactuals, the alternative roads that seemed possible at one historical juncture but were not taken. In other words, we must show both how we get from one historical situation to another and what are the actual range of structural possibilities and the factors on which events turn. This is perhaps as close we can get to an experiment in our kind of research.

capitalism is not a physical location

Capitalism is not a physical location like royal palace or financial district to be sized by a revolutionary crowd or confronted through an idealistic demonstration. Nor is it merely a set of "sound" policies to be adopted and connected, as prescribed in the business editorials. It is an old ideological illusion of many liberals and Marxists that capitalism simply equals wage labour in a market economy. Such was the basic belief of the twentieth century, on all sides. We are now dealing with its damaging consequences. Markets and wage labor and existed long before capitalism, and social coordination through markets will almost surely outlive capitalism. Capitalism, we contend, is only a particular historical configuration of markets and state structures where private economic gain by almost any means is the paramount goal and measure of success. A different and more satisfying organization of markets and human socety may yet become possible.

the endless accumulation of capital

In my view, for a historical system to be considered a capitalist system, the dominant or deciding characteristic must be the persistent search for the endless accumulation of capital—the accumulation of capital in order to accumulate more capital. And for this characteristic to prevail, there must be mechanisms that penalize any actors who seek to operate on the basis of other values or other objectives, such that these nonconforming actors are sooner or later eliminated from the scene, or at least severely hampered in their ability to accumulate significant amounts of capital. All the many institutions of the modern world-system operate to promote, or at least are constrained by the pressure to promote, the endless accumulation of capital.

—p.10 Structural Crisis, or Why Capitalists May No Longer Find Capitalism Rewarding (9) by Immanuel Wallerstein 5 years ago

They can also, in part or in whole, transfer their search for capital from the production (and even the commercial) sphere, and concentrate on profits in the financial sector. Today we speak of such “financialization” as though it were an invention of the 1970s. But it is actually a very long-standing practice in all Kondratieff B-phases. As Braudel has shown, the truly successful capitalists have always been those who reject “specialization” in industry, commerce, or finance, preferring to be generalists who move between these processes as opportunities dictate.

—p.13 Structural Crisis, or Why Capitalists May No Longer Find Capitalism Rewarding (9) by Immanuel Wallerstein 5 years ago

[...] fear leads to the search for political alternatives of kinds not entertained before. The media refer to this as populism, but it is far more complicated than this slogan term suggests. For some the fear leads to multiple and irrational scapegoatings. For others, it leads to the willingness to unthink deeply ingrained assumptions about the operations of the modern world-system. Th is can be seen in the United States as the difference between the Tea Party movement and the Occupy Wall Street movement.

—p.32 Structural Crisis, or Why Capitalists May No Longer Find Capitalism Rewarding (9) by Immanuel Wallerstein 5 years ago 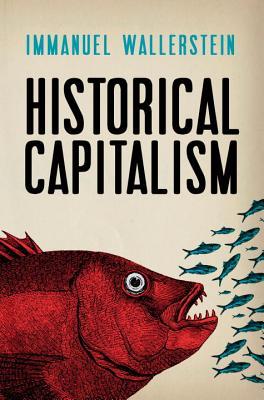 probably my fave take on meritocracy as ideology

Showing results by Immanuel Wallerstein only