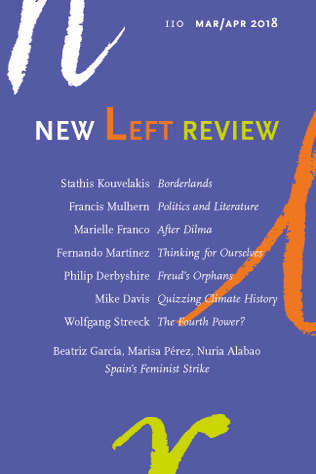 [...] central banks have historically moved back and forth between very different institutional forms: private, public and various combinations of the two. Far from constituting a rational-functionalist formation, they have performed widely diverse and often barely related functions—from the administration of state debt to the issuing of currency and the supervision of private banks—cobbled together more or less ad hoc according to political expediency, just as one would expect in a world of ‘indeterminacy’. What distinguishes them as a type is that they exist to protect finance from the fickleness of political rulers—absolutist or democratic—while providing the latter with at least the illusion of control over the fickleness of financial markets. Institutional independence is crucial, nowadays meaning above all insulation from electoral politics. Monetary questions must be de-politicized—which is to say, de-democratized. Central banks, Vogl argues, constitute a fourth power, overshadowing legislature, executive and judiciary, and integrating financial-market mechanisms into the practice of government.

Central banks’ claim to autonomous authority is based on their assumed, and asserted, technical competence. [...] Central bankers themselves have always been aware, although they hide it as best they can from the unwashed, that central banking is ‘not a science but an art’. This means that what they sell to the public as a quasi-natural science is in fact nothing more than intuitive empathy, an ability acquired by long having moved in the right circles to sense how capital will feel, good or bad, about what a government is planning to do in relation to financial markets. [...]