(from my Goodreads review)

A fascinating WWII memoir by a former RAF pilot who had to parachute out during a bombing mission over Germany. As you can imagine, a British pilot in the heart of enemy territory in 1942—alone, unable to find his crew, with no contingency plan—is unlikely to make it very far before being captured by Germans as a prisoner of war, and that's exactly what happens to Walter Morison. The war may be over for the 22-year-old pilot, but at least the POW camps offer some degree of safety, as well as the opportunity to play an unusual game: attempting to escape.

The crux of the story centers around a cleverly-planned mass escape from Stalagluft III. Most of the escapees are caught almost immediately, but Morison and fellow RAF pilot Patrick Palles Lorne Elphinstone Welch (known as Lorne Welch), in their homemade Luftwaffe uniforms, are more convincing than most. With little food and water, and the awareness that the Germans are on the lookout for them, they spend the next 8 days in a peripatetic and increasingly desperate existence in the German countryside. They manage to get excruciatingly close to their goal of flying away in a German plane before they are caught and transferred to Colditz, where both Morison and Welch remained until the camp's liberation by Allied forces in 1945. 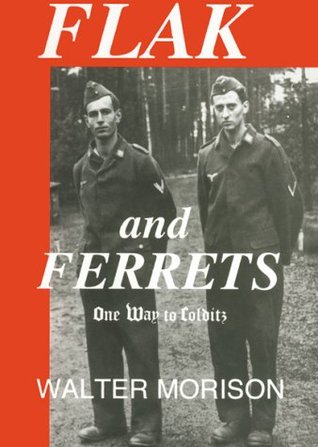 View terms (4)
p.115
truculent »
confirm
eager or quick to argue or fight; aggressively de…
p.40
solecism »
uncertain
a grammatical mistake in speech or writing
p.13
pillion »
confirm
a seat for a passenger behind a motorcyclist
p.6
palliasses »
unknown
straw mattresses
View all 2 notes
p.149
the middle of Leipzig
This would have been the moment to run for it, ex…
p.125
pigeon eggs
[...] Lorne went searching for pigeons' eggs and …